A leading literary magazine, The Atlantic has published many significant works and authors. It was the first to publish pieces by the abolitionists Julia Ward Howe (“Battle Hymn of the Republic” on February 1, 1862), and William Parker, whose slave narrative, “The Freedman’s Story” was published in February and March 1866. It also published Charles W. Eliot‘s “The New Education”, a call for practical reform, that led to his appointment to presidency of Harvard University in 1869; works by Charles Chesnutt before he collected them in The Conjure Woman (1899); and poetry and short stories, helping launch many national literary careers.[citation needed] For example, Emily Dickinson, after reading an article in The Atlantic by Thomas Wentworth Higginson, asked him to become her mentor.[citation needed] In 2005, the magazine won a National Magazine Award for fiction.[26] 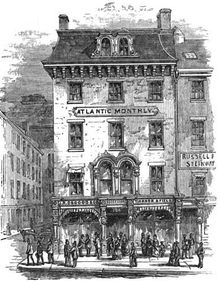 The magazine published many of the works of Mark Twain, including one that was lost until 2001.[citation needed] Editors have recognized major cultural changes and movements. For example, of the emerging writers of the 1920s, Ernest Hemingway had his short story “Fifty Grand” published in the July 1927 edition. In the midst of civil rights activism in the 20th century, the magazine published Martin Luther King, Jr.‘s defense of civil disobedience in “Letter from Birmingham Jail” in August 1963.[28]

The magazine has published speculative articles that inspired the development of new technologies. The classic example is Vannevar Bush‘s essay “As We May Think” (July 1945), which inspired Douglas Engelbart and later Ted Nelson to develop the modern workstationand hypertext technology.[29][30]

The Atlantic Monthly founded the Atlantic Monthly Press in 1917; for many years, it was operated in partnership with Little, Brown and Company. Its published book included Drums Along the Mohawk (1936) and Blue Highways (1982). The press was sold in 1986; today it is an imprint of Grove Atlantic.[31]

In addition to publishing notable fiction and poetry, The Atlantic has emerged in the 21st century as an influential platform for longformstorytelling and newsmaker interviews. Influential cover stories have included Anne Marie Slaughter‘s “Why Women Still Can’t Have It All” (2012) and Ta-Nehisi Coates‘s “Case for Reparations” (2014).[32] In 2015, Jeffrey Goldberg‘s “Obama Doctrine” was widely discussed by American media and prompted response by many world leaders.[33]

The Atlantic is an American magazine and multi-platform publisher.